— On the evolution of chemical communication in lizards -- 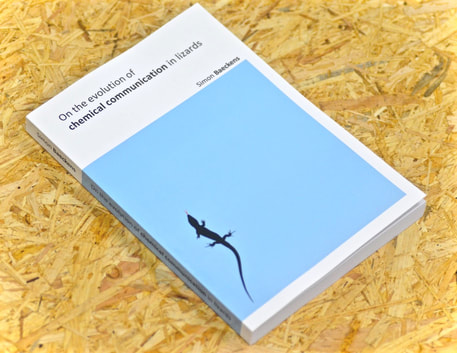 SUMMARY
​The signals that animals use to communicate vary widely in design and complexity among species. The evolutionary drivers and constraints responsible for shaping animal signal diversity are the subject of continued research. Yet, due to our own predisposition for visual and auditory signals, studies of chemical signals are relatively rare. Some biologists have even argued that chemical communication is “the last frontier in the study of animal behaviour”. Moreover, those studies that do examine the evolution of chemical signals have predominantly focused on insects, and typically concentrated on one or two species. With the recent improvements of chemical analytical techniques, this is now rapidly changing, and it has become overtly clear that chemical signals are at play in a wide variety of organisms — including lizards.

Many (male) lizards are equipped with  specialized epidermal glands,   which produce lipid-rich secretions that operate as chemical signals in a range of inter- and intraspecific contexts. Lizards also possess a well-developed vomerolfactory system and tongue for chemical sampling (Fig. 2). Preliminary analyses on a limited number of species reveal considerable differences in the chemical composition of the glandular secretions, and in several aspects of the chemical emitting and receiving system of lizards. Still, the adaptive processes causing this disparity are unknown.

In this thesis, I quantified the diversity in the design of the lizard chemical communication system, and examined the phylogenetic constraints and ecological drivers that influence the evolution of this diversity. I approached this question by integrating the three key components of communication: emitting system → signal design → receiving system. While I mainly focused on lacertid lizards and the use of phylogenetic comparative methods, other squamate species and research approaches were considered too.
Based on histological and literature data, I documented variation in absence/presence of epidermal glands, gland size and number of glands in lizard species. Using gas chromatography-mass spectrometry (GC-MS), I established disparity in the chemical composition of the glandular secretion of 64 lacertid lizards, distributed over Africa, Asia and Europe. Behavioural observations combined with data from previous work revealed considerable interspecific variation in the chemoreceptive behaviour of lizard species. Lastly, I observed substantial differences in the vomerolfactory-lingual system of lacertid lizards on the basis of tongue measurement and micro-CT images of the vomeronasal organs.

The results of this thesis show that the design of the chemical communication system of lizards varies considerably among species, and appears to have evolved relatively fast. In search for evolutionary patterns of variation, comprehensive phylogenetic comparative analyses were unable to ascribe interspecific variation in the chemical signal design of lacertids to among-species differences in diet or intensity of sexual selection. Conversely, I established convincing evidence for an important role of the climatic environment in explaining variation in the chemical signalling system of lacertids, which might results from differential selection on signal efficacy; the ability of signals to travel efficiently through the medium and to attract the attention of the receiver.
While lizards rely on their chemoreception system to sample chemical signals from the surroundings, some species also use their chemical senses to forage. The foraging mode of lizards strongly predicted interspecific variation in vomerolfactory behaviour (tongue-flick rate), but not vomeronasal-lingual morphology. However, the latter was related with species degree of investment in chemical signalling, cautiously hinting for co-evolution between the signal emitting system and signal receiving system, hence the evolution of an ‘optimal’ communication system. Unmistakably, only additional thorough research on the functional morphology of the lingual - and vomeronasal organs may (in)validate this.

This work sheds a first light on the macro-evolutionary processes moulding variation in the chemical signal design of (lacertid) lizards and provides important bedrock for future research. I encourage scholars to focus on the role of intraspecific competition, predation pressure, and eavesdropping in future studies on the evolution of chemical communication in lizards.