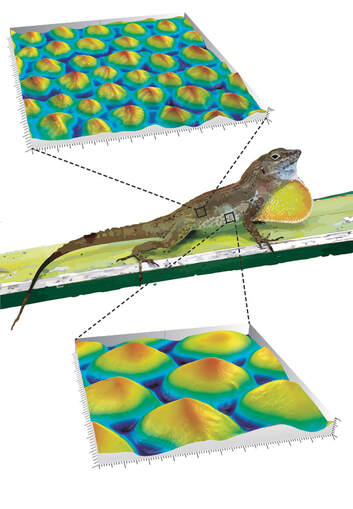 Skin surface topography as revealed by gel-based stereo-profilometry
// Evolution and function of fine surface structures of lizard skin //
The skin surface of lizards carries spectacular ornamentations, which vary in multiple aspects even among closely related species. In recent years, new imaging techniques have revealed that the variability of skin surface structures at the macroscopic level is dwarfed by the structural variation at the micro- and nanoscopic level. Some of these fine structures have received ample attention, such as the nanostructures on the feet of geckos responsible for the animals' remarkable adhering capacities, which have inspired the super-adhesive biomaterial Geckskin®. However, in most cases, the exact functions of fine surface structures and the evolutionary and ecological reasons why they vary so dramatically among species remain unexplored. To fill in this hiatus, this project aims to visualize and compare the fine surface structures of the skin of a large number of lizard species facing a range of different environmental challenges. Biomechanical and optical experiments are conducted to assess the physical properties of skin with different fine structures, which enable us to link structure with function. This further allow us to reconstruct the evolutionary history of fine surface structures, and ultimately, unravel whether species evolved similar skin features to adapt to similar environments.

Quantifying claw shape using elliptic Fourier analysis
//  Adaptive diversification and evolutionary convergence of skin appendages //
Species occupying similar selective environments often share similar phenotypes as the result of natural selection. Recently, however, several authors have cautioned that external resemblance can arise for other reasons than recurring selection. New conceptual and empirical developments have revived and deepened the study of convergence; it is now recognised that testing the adaptive nature of convergence may require phylogenetic analyses, assessing the functional significance of the trait and its fitness value in relevant conditions, as well as examining variation in its genomic substrate. I believe the vertebrate claw systems constitute a promising but understudied model system for the study of phenotypic, functional, and genetic convergence. By combining a variety of experimental approaches and biomechanical techniques in an explicit phylogenetic comparative framework, we try to link form and function in order to gain insight into the evolution of the lizard claw. 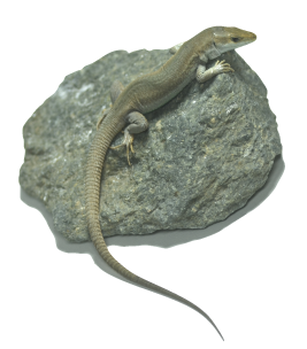 Lizard from Mali Barjak
// Food specialization and functional divergence of head shape in island lizards //
During a recent island-expedition in the Adriatic Sea, near Croatia, my colleagues and I came across two peculiar islets that differed dramatically in appearance: ‘Brusnik’, densely covered with flowering plants surrounded by a variety of large-bodied insects, and the bare and tiny island of ‘Mali-Barjak’, covered with nothing but rocks and a limited amount of small, terrestrial insects. Intriguingly, both islets were populated by Dalmatian wall lizards (Podarcis melisellensis), which —even more fascinating— appeared to deviate in head shape and head size from conspecifics on nearby islands. Later, preliminary findings established our prediction, showing that lizards on Brusnik are equipped with short, wide heads, while Mali-Barjak lizards bear long, pointed heads. We believe that lizards on Mali-Barjak and Brusnik evolved to be food specialists, in which their divergent head morphology allows them to prey efficiently on the food available on their respective islands. To test this hypothesis, we assess lizards’ feeding performance (bite capacity and prey handing capacity) for several types of prey (differing in size, hardness, mobility). These findings, in combination with data on food availability and consumption, can provide us strong evidence on the functional and adaptive significance of head morphology divergence in islands lizards, which in turn, can be used as leverage to take action in protecting and conserving the island-biodiversity in the Adriatic Sea. 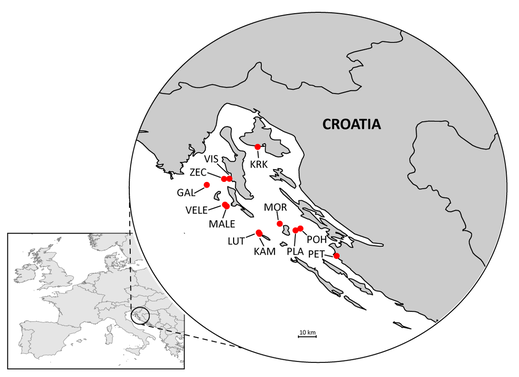 Samples sites in Croatia
// Drivers of chemical signal divergence: a comparative and experimental approach using island lizards //
With the recent improvements in methods of chemical analysis, it is becoming increasingly clear that chemical signals are at play in multiple contexts in a wide variety of organisms, and that the diversity in chemical signal design is vast. Yet, we still have a poor understanding on the evolution of chemical signals. In this project, we aim to disentangle the ecological drivers (e.g. predation pressure, intraspecific competition, diet) of chemical signal diversity in island lizards. We tackle this question using two different approaches. On the one hand, we compare the chemical signal design of Podarcis siculus lizards originating from different island populations in the Adriatic; islands which have been colonized for a long time, thus holding stable populations that have attained the ‘island habitus’. On the other hand, we examine rapid chemical signal divergence using an island introduction experiment. In 2014, Colin Donihue and his colleagues introduced Podarcis erhardii lizards from the large island of Naxos to five islets around Paros, in the Greek Cyclades. Donihue’s experiment mimics the natural movement of species between islands and provides new insight into the evolution of the “small-island phenotype” of the species. We use his unique experimental setup to assess how chemical signal design diverges due to novel ecological contexts (i.e. low predation pressure and high intraspecific competition) on a short evolutionary time scale.
// The evolution of cognition and personality in island lizards //
This project compares aspects of cognition and personality of mainland and island lizards, Podarcis siculus. Islands differ considerably from mainland habitats in a series of biotic and abiotic factors, and organisms often respond to this variation with striking phenotypic change. Because populations on different islands evolve independently, archipelagos offer unique opportunities for testing ideas concerning phenotypic plasticity and genetic evolution. The effects of insularisation on the morphology and life history of organisms have been studied extensively in many species. Changes in cognition and behavioural syndromes have received far less attention. Yet, such changes seem plausible; as islands typically harbour less predators, competitors and prey, we expect adjustments of cognitive capacity (high-low intelligence), cognitive style (speed-accuracy) and personality (fast-slow), to name a few. By measuring these variables in individuals of several mainland and island populations, and by raising individuals with varied provenance in common garden set-ups, we aim to acquire insight into the plasticity and evolutionary flexibility of cognition and personality.